Base of Fire Tactic 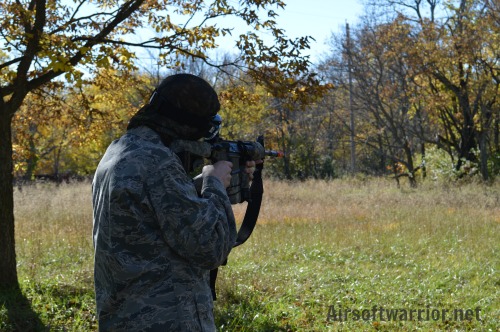 The base of fire tactic is one of the most useful tactics in airsoft.  It involves using part of your team as a “base” that provides covering fire for operations and a fall back point for the rest of the team. It can be used with your other tactics to enhance their effectiveness or it can be use by itself as an effective defense.

I used the base of fire in a recent battle.  My team needed to route the enemy from a very strong position. We decide to position our base of fire man behind cover while the rest of the team made a full out attack on the enemy’s flank.  On the command he laid down a wall of BBs on the enemy position.  He kept their heads down long enough for us to cross open field and overrun the enemy.

Here is how the base of fire tactic works-

1.  Find a defensible point for your team member(s) to position in so they can provide a base of fire.  It needs to have clear firing lanes that allow your team to engage the enemy or cover your team during the operation.

2.  In the chosen location, position a machine gun or other effective weapon that will be able to engage the enemy and keep them pinned to their position during the operation.  If the enemy’s head is down they won’t be able to effectively stop the rest of you team from engaging them or over running their position.

Using the base of fire tactic will allow you to enhance your tactic and combat effectiveness.  Try implementing it in your next battle!  Let me know how it went.